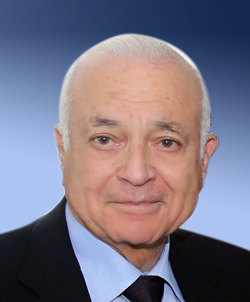 Dr. Nabil Elaraby is the Chairman of the Board of Trustees at CRCICA. He served as a director of CRCICA from 2008 to 2011.

Previously he was a judge at the International Court of Justice from 2001 until February 2006. As an Egyptian diplomat, he served as the Permanent Representative to the UN in New York from 1991 to 1999; and in Geneva from 1987 to 1991, a member of the International Law Commission of the United Nations from 1994 to 2001 and the president of the Security Council in 1996.

He was Legal Adviser and Director in the Legal and Treaties Department at the Ministry of Foreign Affairs from 1983 to 1987; head of the Egyptian delegation to the Taba dispute negotiations from 1986-1988. In addition, he was appointed as Minister of Foreign Affairs in 2011 and later was elected as secretary General of the league of Arab States.

Dr. Nabil El Araby either presided or sat as arbitrator in many arbitrations according to the rules of arbitral institutions worldwide including the Cairo Regional Centre for International Commercial Arbitration and International Chamber of Commerce International Court of Arbitration in Paris and specifically in a dispute concerning the Suez Canal (1989-1992).