CRCICA has lost on 29 September 2019 the noble scholar and judge Counselor Mohamed Amin El Mahdy, Chairman of CRCICA’s Advisory Committee, Vice Chairman of CRCICA’s Board of Trustees, Former President of the Egyptian State Council and Former Minister of Transitional Justice and National Reconciliation. “Egypt has lost an eminent jurist who understands the spirit and objective of law whether as a judge or a Cabinet Minister.  Counselor El Mahdy knew that justice must always be observed and seen to be done. He applied this rule whether in national or international cases.  Justice applied across the board was his motto.” said Dr. Nabil Elaraby, Former Secretary-General of the Arab League, Chairman CRCICA’s BOT, Former Minister of Foreign Affairs of Egypt, and Former Director, Cairo Regional Centre for International Commercial Arbitration.  Indeed, Counselor El Mahdy was the judge and arbitrator who respected the values of impartiality, integrity and independence to the point of sanctification.  “CRCICA grieves a tremendous and marvelous judge and arbitrator of a profound knowledge and unrivalled level of kindness, fairness and integrity … Counselor El Mahdy (is) the most valuable role model of generations of judges, arbitrators, and lawyers in Egypt on the regional and international levels.  A man who believed in peace and valued the rule of law and the independence of the state justice and the arbitral justice as well”, commented Dr. Ismail Selim, Director of CRCICA. Counselor El Mahdy was genuinely humble and kind as a scholar could be: “Hearty condolences not only to our Arbitration community but also to Egyptian judiciary. Egypt lost an eminent judge and very able jurist! … Counsellor Amin El Mahdy was unique in his human warmth and faithfulness !”, commented Counselor Dr. Borhan Amrallah, Former President of the Cairo Court of Appeal, Chairman of CRCICA’s Advisory Committee.

Counselor Amin El Mahdy devoted his life to generously serve the legal community in Egypt, on the regional and international levels, and to serve the values of justice and the rule of law: “Egypt lost one of its most eminent judges whose competence, fairness and decency were the tools for achieving all his goals. CRCICA lost a great supporter who accompanied our arbitral institution since its inception and always provided his precious support and assistance especially during the most critical periods. I lost a genuine advisor, a real gentleman and a unique human being whose wisdom, generosity and humility will be dearly missed.” said Prof. Dr. Mohamed Abdel Raouf, Attorney at law, Partner and Head of Arbitration Group at Abdel Raouf Law Firm, Former Director of CRCICA, and Member of CRCICA’s Advisory Committee.

Coun. El Mahdy was part of the Egyptian delegation representing Egypt in the famous Taba Arbitration Case. From November 2001 to November 2005, he served as a judge in the International Criminal Tribunal for the former Yugoslavia. During his tenure as President of the Egyptian State Council, many important rulings and legal principles were issued. Counselor Amin El-Mahdy was a mentor to generations of judges, lawyers, arbitrators and law professors; he was the true idol judge for all others to follow: “A great loss to the arbitration and legal community in Egypt and beyond. He was truly an honorable man, who was loved and respected by all.” commented Prof. Dr. Mohamed Salah Abdel Wahab, Founding Partner & Head of International Arbitration, Construction and Oil & Gas, Zulficar & Partners Law Firm, Chair, Private International Law and Professor of Dispute Resolution, Cairo University and Member of CRCICA’s Advisory Committee; and Dr. Karim Hafez, International Arbitrator, Hafez, Member of CRCICA’s Advisory Committee, added “Coun El Mahdy personified values that are today everywhere in retreat – humility, generosity, kindness, and a willingness to compromise. A gentleman always and to the end. A son of an Egypt that is sadly no longer. It has been a privilege and an inspiration to have seen him conduct the business of life.”

Those who worked with Counselor El Mahdy will always cherish their shared memories; Prof. Philippe Le Boulanger, Cabinet Leboulanger & Associés; Former Chairman, French Arbitration Committee, and Member of CRCICA’s Advisory Committee confirmed that “He was not only a great – although so humble- jurist, and a real gentleman but also a conscience and a guide for all of us at the CRCICA. It has been a privilege to work with him”; and Mr. Craig Tevendale, Partner, Head of International Arbitration Group in London at Herbert Smith Freehills, Member of CRCICA’s Advisory Committee said “His contribution to our AC Committee was of the highest order, and greatly appreciated … Counselor El Mahdy (has) many other excellent contributions in the Egyptian and international legal contexts”.  Prof. Nassib Ziadé, Chief Executive Officer, Bahrain Chamber for Dispute Resolution (BCDR), Vice President, the International Federation of Commercial Arbitration Institution (IFCAI), and Member of CRCICA’s Advisory Committee also outlined that : “Throughout all these years, Judge El-Mahdy remained true to himself: knowledgeable, humble, decent, a man of great integrity, and a true gentleman”.

The personal and professional values of Coun. El Mahdy are well echoed in the words of Dr. Ahmed Ouerfelli, Attorney at law, Former Presidential Legal Advisor, Former Judge, Member of CRCICA’s Advisory Committee :”It is not only a great loss for our Committee, but for Egypt and for the arbitration community at large. He was a true gentleman, and represented values of humility, kindness and humanity. He will be dearly missed.”  Dr. Karim Youssef, Managing Partner and Head of International Arbitration & International Law, Youssef & Partners Attorneys, and Member of CRCICA’s Advisory Committee also added: “I am deeply saddened by the passing of our dear Counselor Amin El Mahdy. The word that comes to mind to describe him is “venerable”. He was a venerable judge and a venerable statesman.”

Coun El Mahdy also had very extensive experience in arbitration, as he had participated as an arbitrator in the famous SPP vs Egypt Case before the International Centre for Settlement of Investment Disputes (ICSID), and in many other important cases. Counselor Amin El Mahdy had enriched Egypt and the World with his writings in the legal and arbitration fields.   Ms. Samaa Haridi, Partner, Hogan Lovells, and Member of CRCICA’s Advisory Committee echoed :“All of my interactions with him these past years evidenced in spades what all of you have already said: he was a jurist of the highest caliber and a genuine, caring and good human being. For these and many more reasons, he will be sorely missed”.

The loss of Coun El Mahdy is a deep sorrow as we have lost one of the most ethical and noble judges and arbitrators. His lasting legacy will be recognized and respected by judges, lawyers, arbitrators, law professors and academics worldwide. Ms. Rabab Yaseen, Partner at Mentha & Partners, Deputy Judge to the Civil Courts in Geneva and Member of CRCICA’s Advisory Committee added “It is not only a great loss for our Committee, but for Egypt and for the arbitration community at large. He was a true gentleman, and represented values of humility, kindness and humanity.”

Coun El Mahdy will always be remembered by CRCICA and the Egyptian and international legal community. 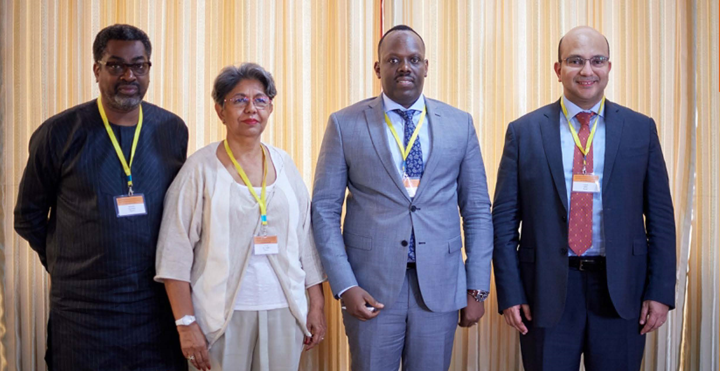